Posted at 10:40h in Uncategorized by Dean 0 Comments
0 Likes

We’re all quite tired of the pandemic and the way it’s affecting us across the world. As soon as one lockdown ends, another is instituted and some regions are seeing new flare-ups.

The moment we think we’re done with this wretched virus we find red tape and brick walls to economic and physical movement.

Indeed, this is a frustrating experience for us all, but in between the chaos and confusion there are also some novel products and services popping up all over the place which will probably not have seen the light were it not for this ridiculous year. 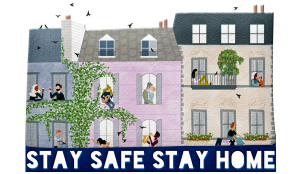 Rand Rescue urges our clients and readers to take a break from all the stress. Giggle and awe with us at the strange new things which have hit our shelves this year.

Dining at a distance

With lockdown being lifted worldwide, many restaurants have had to adapt the way they serve food. Eating domes are popping up all over the place. These domes which had originally been designed as greenhouse pods, have been adapted to cater for diners and patrons can now eat in faux-isolation within these booths. KFC has automated some of their restaurants to incorporate robotic arms to serve patrons. In the Netherlands, the restaurant Dadawan is using robot servers to tend to patrons reminiscent of Star Wars and Wall-e.

What started off as a bit of a joke earlier this year has turned into a very novel social-distancing business. In April 2020 a photo went viral showing an elderly man wearing a pool noodle hat in a grocery store. The picture swiftly went viral and sparked several hilarious memes. But Café Rothe in Schwerin, Germany, didn’t think the idea was laughable. In fact, the cafe procured enough of these social-distancing hats for all their patrons and proudly handed these out when they reopened following lockdown. The fun didn’t stop there, as Burger King in Germany followed suit with custom social-distancing crowns.

Another Burger King innovation in Italy is its social distancing whopper which is triple-loaded with onions to ‘keep others at a distance’. 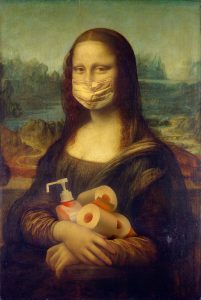 Not only can we now open doors without handles, but there are different variations of hands-free handles available. Whether it’s a pulley which requires you to use your forearm to open, a button you tap with your foot, a flap that can be pressed with your body or automated sensors, it’s clear that touching door handles and knobs may soon be a thing of the past.

There is even a portable door handle ‘arm’ designed by Matteo Zallio which can be printed using a 3-D printer, and another manufacturer designed a mobile multi-opener which can be used to open doors, press elevator buttons and door buzzers and open waste bins.

Though face masks are certainly not a new invention, their prevalence around the globe has lead to remarkable adaptations and new designs for these masks.

Some masks now feature flaps through which one can eat. You can find face masks with built-in bluetooth headsets and microphones. The biking industry which has long manufactured leather masks have now transferred these masks to a coronavirus-relevant world and novel steampunk masks are a popular buy on places like Etsy. Other conceptual artists are designing masks which mimic space-aged futuristic robotics. The masks have also made their way to runways as the trend is adopted by Haute Couture designers like Studio & Talia, Voravaj Bangkok, Collina Strada, Lirika Matoshi, Akese Stylines, Anne Sophie Cochevelou and

A restaurant in Belgium has customised face masks for all staff by printing their own faces on the masks. The owners feel that this helps them maintain the human touch in serving patrons. And the sporting world has not rested on its laurels either; brands like Nike, Champion, Nu Balance, Ciovita, Adidas, Wolford and Bula have all designed unique masks aimed at the fit and active.

Music to isolate to

Across the world people are using the pandemic as motivation and inspiration to produce new music and distribute it in new ways. In fact, among the ashes of this socially-scorched year a new genre of music would emerge – pandemic pop. Artists who have released coronavirus-themed songs this year include Gmac Cash, Cardi B, Bobi Wine, Dua Lipa, Tiki Taane, Hollie Smith, Anna Coddington, Stan Walker, Bono, Psychs, the Kiffness, Bad Bunny, the Ndlovu Youth Choir, and Kathy Mak.

But perhaps most surprising is the political Covid-19 hymns popping up. The Ministry of Health in Vietnam rewrote a 2017 hit song with new lyrics, now titled Ghen Cô Vy. In Panama, former presidential candidate Rubén Blades released a coronavirus-themed song called Para Panama, and in Liberia, president George Weah (who also happens to hold the 1995 world football player of the year title), released the song Let’s stand together and fight coronavirus.

With so many people stuck at home and unable to participate in sporting and athletic activities, we were bound to see some strange new innovations this year.

Some social-isolation inventions include ‘chair soccer’ which has chairs with mini football nets attached at the bottom so two people on opposing chairs can play a match in the living room. 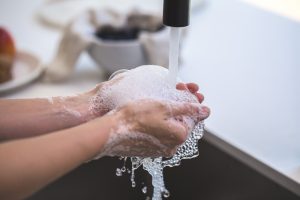 In Spain many individuals stuck in large blocks of flats have taken to window tennis where players in different flats can hit the ball back and forth between balconies and windows. The game can be a bit tricky should someone miss a shot, and requires quite a lot of balls to keep the game going.

Other bored innovators have started playing rumba curling – which is basically just an adaption of normal curling using an automated cleaning device. Then there’s the hilarious ‘home treadmill’ which merely requires a bit of dishwashing liquid and water on your kitchen floor, holding onto the kitchen counter and walking or running on one spot over the slippery surface (we don’t advise our readers to take this one up as it has lead to several chin, teeth and head butts against counters and floors).

One remarkable and very welcome outcome of Covid-19 is that many people and businesses are accidentally going green.

Many individuals have started growing their own produce at home, while smaller local farming operations have seen a surge in business. With so many big retailers overwhelmed by the amount of online orders, this has opened the door for other producers who generally use less pesticides and packaging for their produce. The large retailers are also moving away from single-use plastics, opting for bagging and packing items in recycled paper packaging or boxes.

Hong Kong’s Ocean Park Zoo has seen a surprising twist in closing their doors. Two pandas who have struggled to mate for ten years have finally done the deed out of the watchful eyes of onlookers. It seems they, too, are thankful for social distancing.

And, of course, with less people driving around and less industries operating during Covid-19 the earth is also finding its lungs again with cleaner air and a significant drop in pollution worldwide.

Mathew and Joseph Toles from Seattle were concerned about how much people touch their faces and decided to come up with a solution. They developed Immunotouch smart bands which buzz each time the user’s hand goes near their face to stop them from touching.

South Korea has created ‘phone booth’ testing rooms in hospitals which allow doctors to test patients through the booth screens and a Canadian kickstarter created the SqeezyBand hand sanitiser armband which can be used to sanitise hands on the go.

Not to be one-upped, Chinese scientists have created smart helmets which can detect fevers in others within a 5-metre radius.

We’re sure our readers have their own innovations, tricks and hobbies invented to make life easier, more bearable and safer in these strange times.

Check in again next time for more Rand Rescue news.