How Safe Are You In South Africa?

06 Sep How Safe Are You In South Africa?

Posted at 09:48h in Uncategorized by admin 0 Comments
0 Likes 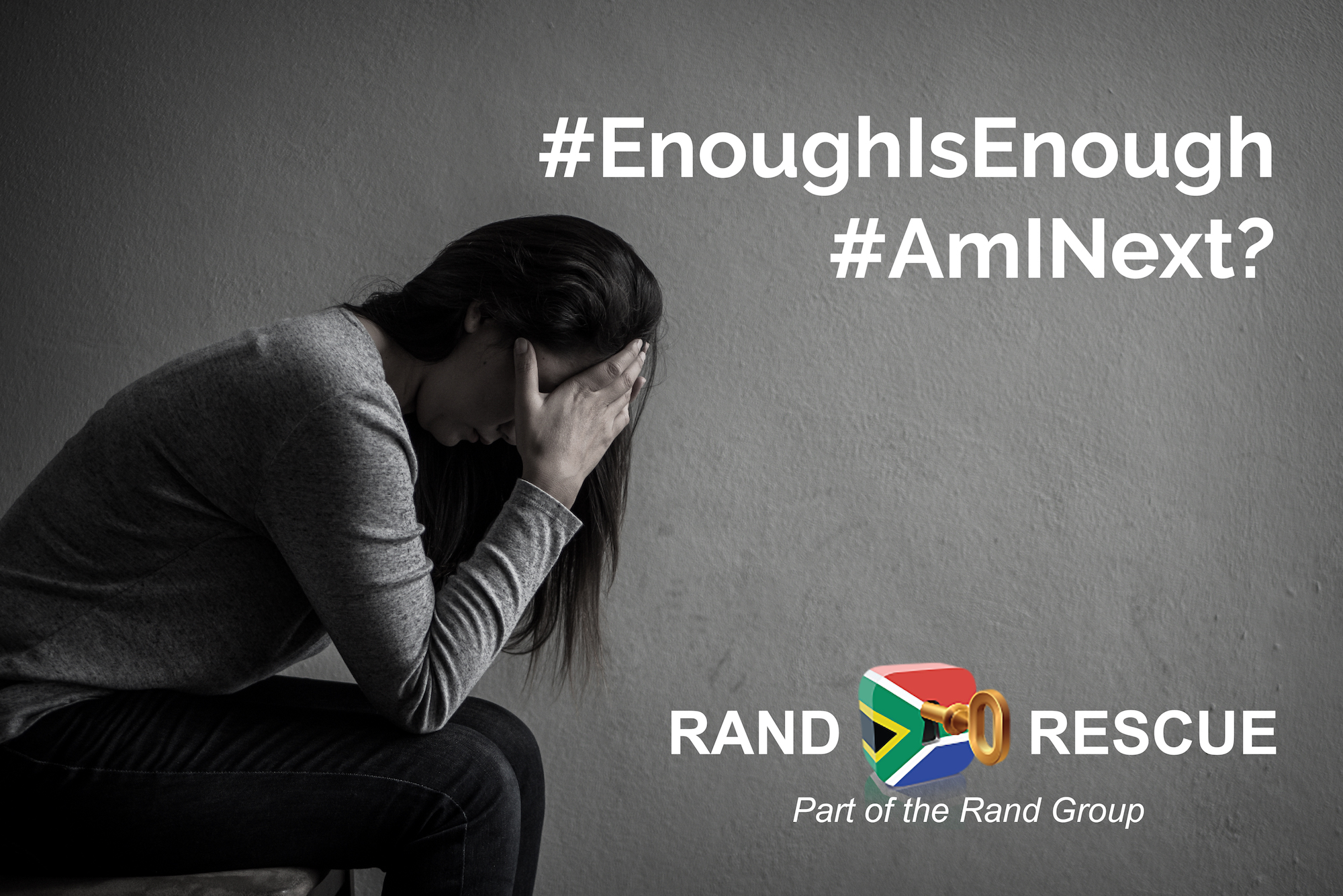 Are our families safe in SA?

Anyone who’s followed the South African news in the past few weeks will be aware of the public outrage over violence against women and children.

The outrage, which had been seething beneath the surface for a while, boiled over at the beginning of August following the murder of film student Uyinene Mrwetanya who was sexually assaulted inside a post office and bludgeoned to death with a government-issued scale.

The most violent of countries

Uyinene Mrwetanya is but one of the faces of the #AmINext? and #EnoughIsEnough movements. Among others are South African boxing and karate champion, Leighandre Jegels, who was shot to death by her estranged boyfriend—a South African police officer. In the weeks before, show-jumper and bakery manager, Meghan Cremer, was abducted and murdered—her body dumped in a sand mine, and Lynette Volschenk was murdered and hacked to pieces in her Bellville apartment. 14-year-old Janika Mallo is another victim; raped and murdered in her grandmother’s backyard. 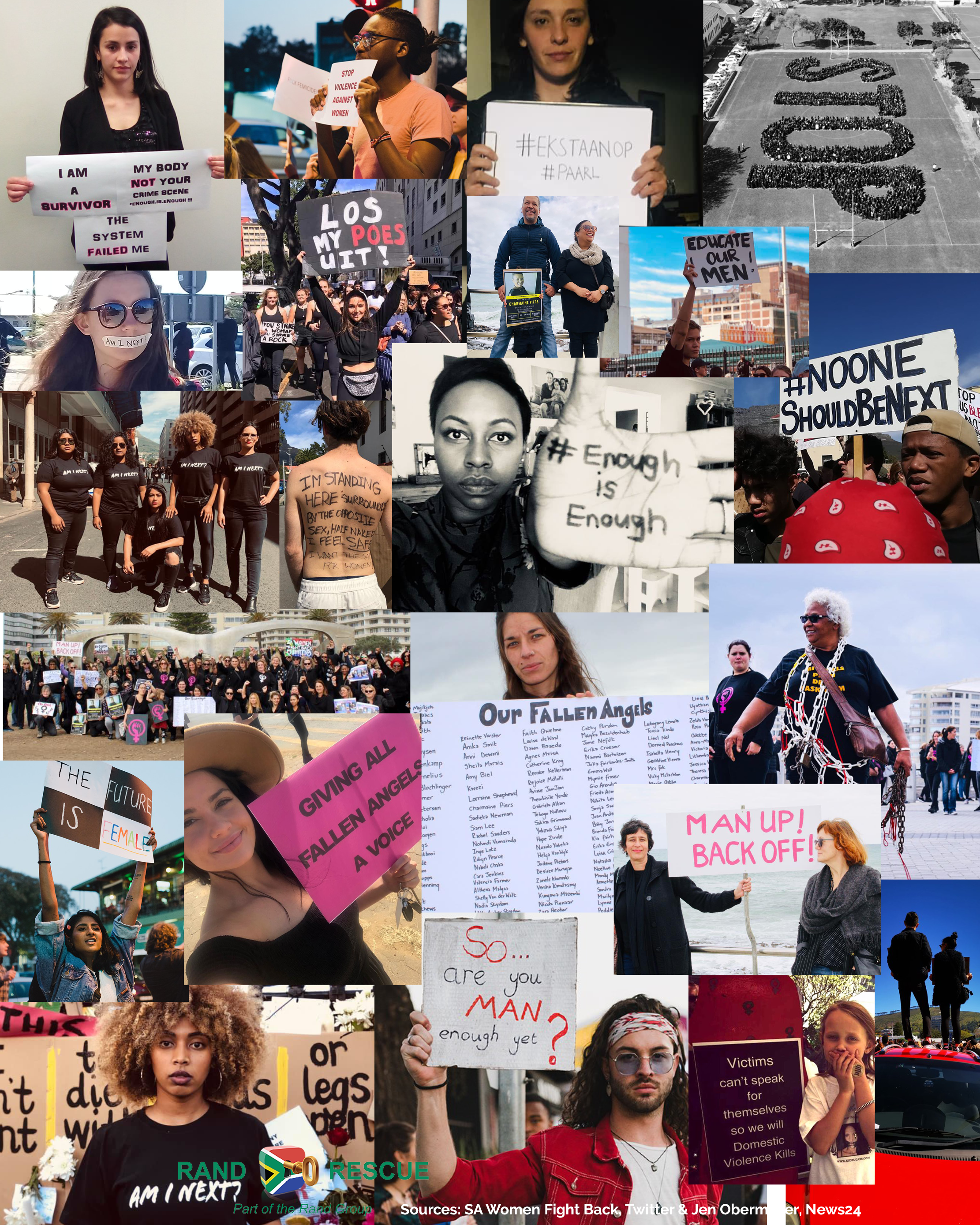 Then there is Jesse Hess, the 19-year-old was murdered in her bedroom while her grandfather was subdued in the bathroom. What of the four children, Ayakha Jiyane and Khwezi, Sphesihle and Kuhlekonke Mpungose, who were hanged by their father earlier this week, or Verusha Padayachee, beaten and strangled to death by her husband? And young Amahle Thabete who has been missing for more than a 100 days? Or 45-year-old Nicky who was shot and raped in front of her children on her farm earlier this year.

The fact remains that South Africa is among the most violent of countries and for many women and children, a fate awaits which many believe is worse than death.

But South African women have banded together to say that enough really is enough. Women, and those men who support them, have taken to the streets to protest the lack of action to counter rape, assault and femicide. Women are calling on parliament to keep them safe and are asking men to step up and address the inherent violence they perpetuate.

Such is the outrage, that prominent companies like Metropolitan, the University of Stellenbosch and ABSA have sanctioned their staff to join the protests, offered transport to the protest sites and asked all to wear black in solidarity for the plight of women. Businesses across the country are showing support in numerous ways. Restaurants across the country have started a ‘Come In’ campaign. Putting signs up telling women that, should they feel unsafe, they can enter the premises without buying anything and that the staff would wait with them or escort them to safe place. Prominent martial artists are offering free self defense classes to women and several law firms are offering their services free of charge to victims of abuse and rape.

And after a raging mob stormed the streets, President Ramaphosa had shown the country that he’s heard, addressing South Africans on Thursday, 5 September.

As we watch these things play out in the media though, one questions remains top-of-mind; are women really safe in South Africa? And if not, where will they be safe?

Whatever the stats or numbers, the latest campaign seems to have unified certain factions in South Africa while polarising others. 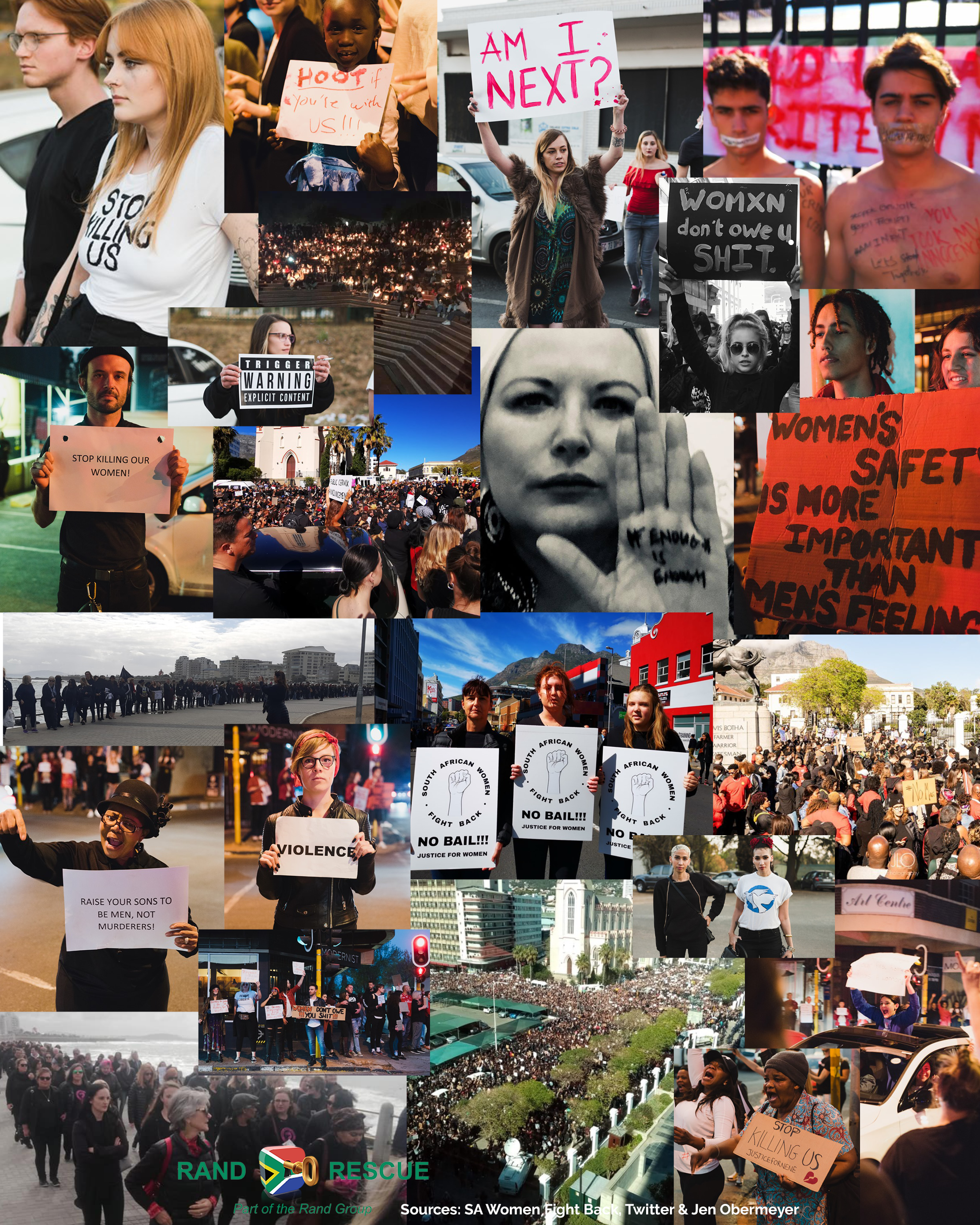 Many men feel victimised and vilified by the generalisation of men as deviant aggressors, whereas many women feel their voices are muted in the process of showing empathy for those men who are not violent (or under the strongarming of those who are).

But while these groups lock horns, those who seek to make a difference struggle to get their voices heard during this impasse.

Rand Rescue’s aim is therefore not to point fingers or, but to stand in solidarity with women who are victims of sexual violence and offer some insights into safer environments abroad.

Though emigration may not be an option for everyone it’s undeniable that our daughters, our wives and mothers live in fear for their own safety every day, while our husbands, fathers and sons fear that such heinous crimes may befall those they have sworn to protect. In the case of farm attacks and home invasions it seems that sexual assault—often by multiple perpetrators—is almost certain for the women in the households, irrespective of age.

And though we wish not to think about these things, it seems that those of us still left in South Africa face a constant internal barrage of questions and choices. Can we do something about this situation? Can we keep our families safe? Is it acceptable to stay given the risk? Is it acceptable to leave out of fear? Should we stay and fight? Should the safety of our women come first?

There are many reasons why South Africans choose to emigrate—better salaries, job opportunities, education, a better climate, better health care or retirement options—but one of the primary push factors remains safety.

The pervasiveness of sexual violence is something many South Africans are aware of, but such a sensitive subject tends to be muted. Women suffer in silence and humiliation and men feel helpless or disgraced by their inability to protect. It remains true that more men are murdered in South Africa each year than women, and of course sexual assault is perpetrated against men as well, but the difference lies in the sex of the aggressors—men.

A study by the Federal Bureau of Investigation in the USA found that in two groups—100 000 men and 100 000 women—men exhibited ten times the likelihood to commit violent offenses, including that they are:

Furthermore, the study showed that male victimisation rates tend to be higher in metropolitan areas—indicating that many of the crimes against men are due to proximity and opportunity—whereas female victimisation rates are similar for both metropolitan and rural areas. The latter points out that women are likely to be abused or murdered irrespective of their location.

Of course, these statistics were gathered from sources outside SA, as similar studies have not been conducted on home turf—and yet we know the rates for SA will be even more shocking. Even if crimes are reported, the HEUNI International Statistics on Crime and Justice report showed that there is a major disparity between crime reporting of the criminal justice system (police) and public health officials. The study indicated that almost half of the crimes registered by doctors and other health services providers in Southern Africa are never reported or documented by the police. This is in stark contrast with North America, Europe and Oceania where criminal justice and public health records tend to be on par.

The question many prospective immigrants ask themselves is whether it’s any better elsewhere in the world? Assault can, after all, be perpetrated anywhere in the world. But what odds do we face in different regions worldwide?

Let’s compare the statistics for SA with those of the most popular expat destinations:

Bear in mind that the Medical Research Council has stated that only an estimated 1 in 9 sexual assaults in South Africa are reported to authorities. Looking at these statistics, it’s clear that South Africa has a disproportionate amount of violent crime compared to those destinations most choose as their new home.

Murder and rape aside, there have been various other studies and surveys worldwide pointing towards safe travel or relocation destinations in the world.

5 Safest countries for women to live

Johannesburg firm New World Wealth released their Global Wealth Migration Review for 2019. Among other things, the review pointed out which countries were safest for women to live in.

Combining this review and the 2019 Best Countries list focused on women, these are the top places to live if you’re a woman:

Per major region, the following countries were ranked the safest for women:

What about overall safety?

Of course, although the focus of the article is on female safety, one cannot consider safety in isolation, but need to view things holistically. Given that many people have eclectic families, one needs to consider how safe and cosseted each member of the family would be around the world.

The End of Childhood Report 2018 indicated which countries were most likely to offer children a safe, healthy and protected childhood. These countries are:

The report also showed that all ten of the most dangerous countries for raising a child are in Africa.

The least racist and most accepting countries for families of mixed race, or those who want to feel accepted irrespective of their familial heritage are:

The World Values Survey which drew up a map to show the least and most racist societies, stated that racial segregation and intolerance is predominant in Asia, the Middle East and northern Africa.

Threats aren’t necessarily always presented through intentional human action or violence. In fact, automobile accidents are one of the greatest safety hazards around the world. If this is a concern for you and you want to know which countries is the safest for driving, we have you covered:

When it comes to terrorism, the Global Terrorism Index tells a whole different story when it comes to our safety. It’s been clear for a while that global tensions are rising and being wealthy, Western or relatively safe in other respects does not preclude any nation from terrorism threat.

According to this index, the following countries are safest in terms of terrorism:

These rankings may seem surprising given that some of these countries are known for poverty and violent crime, and yet it makes sense that terrorists may not have the same bargaining power or motivation to operate in these regions.

Though the countries that ranked the highest in terms of terrorism aren’t popular travel or relocation destinations, there are still a few countries which rank relatively high on the terrorism scale, such as Thailand (15), France (29), Russia (30), UK (34), USA (36), Germany (41) and Greece (43). 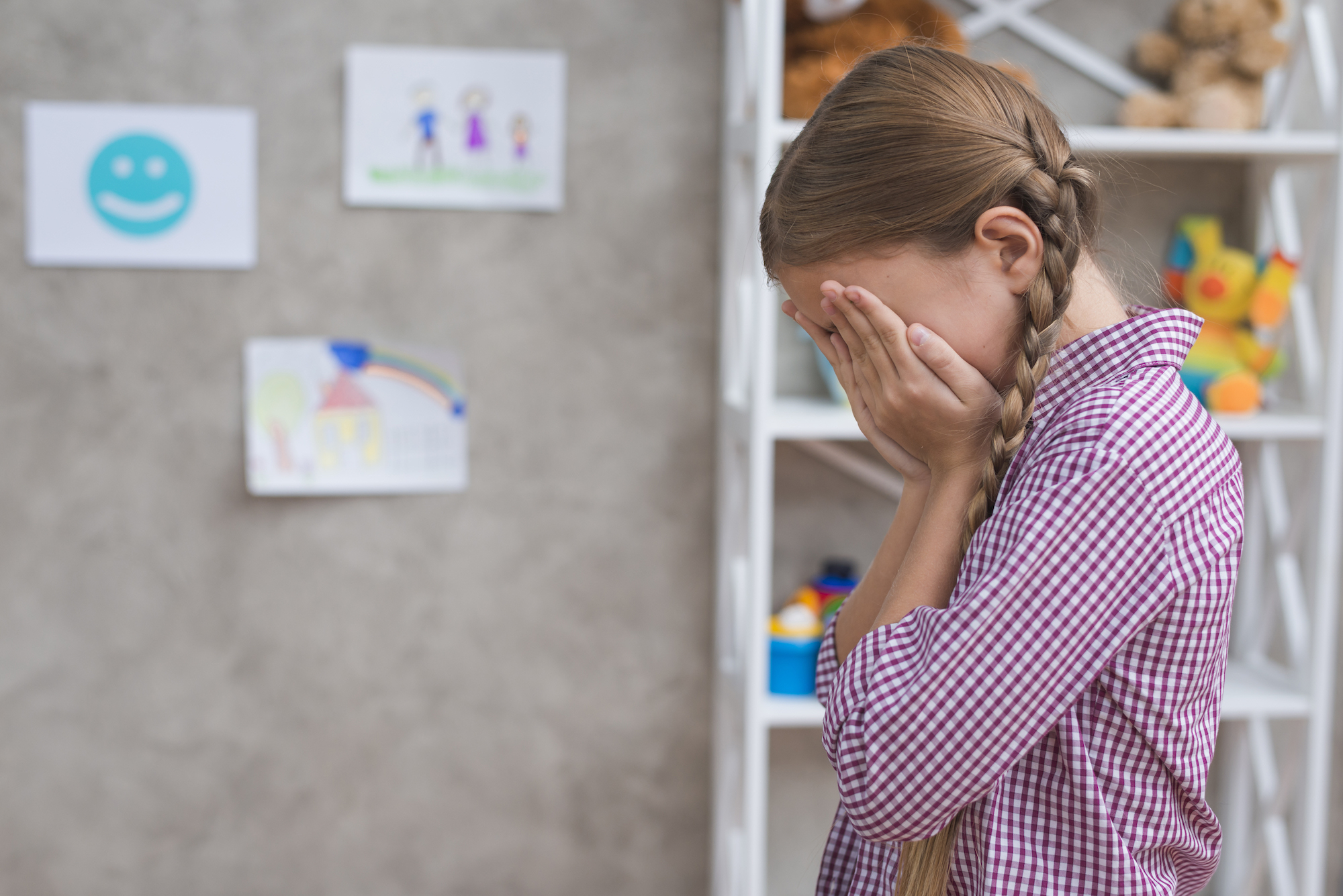 As parents, spouses and even children we need to look at the state of South Africa objectively and determine whether staying or going is on the cards—weighing up the risks and rewards. Leaving one’s home is never easy, and it is a costly process, but staying put could cost us even more. The outrage is a positive sign, but many feel that it’s too little too late and that true change will take too long.

It is, however, a personal choice which can only be dictated by your own convictions and circumstances.

Should your mind lean toward relocation, remember that Rand Rescue can assist you in sorting your cross-border finances and financial asset transfers to your new home. Simply leave your details below and we’ll get back to you.