Out with Mboweni and in with Godongwana

30 Aug Out with Mboweni and in with Godongwana

Posted at 06:22h in Uncategorized by Dean 0 Comments
0 Likes 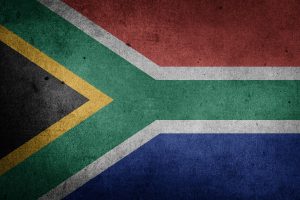 Out With Mboweni And In With Godongwana

Earlier in August Tito Mboweni announced his resignation as Minister of Finance. Although Mboweni had indicated for a while that he was looking at stepping out of his role, the news still shocked and saddened many.

We take a look at his work, legacy, and the man who is stepping into his shoes, Enoch Godongwana.

Why did Mboweni resign?

Although Mboweni had indicated his intent to resign months before, the decision still shocked many South Africans. But while his presence at the helm of our Ministry of Finance will surely be missed, there are those who feel that he had been aloof and disinterested in his role for too long, and that staying on will have merely encouraged his dereliction of duties.

Many believe that Mboweni had been systematically pushed out of his role by the ruling party; for as much as some South Africans have praised him for opposing public sector unions and civil servants’ overspending, these very things made him quite unpopular within his own party.

Whether he left of his own accord or was kicked to the kerb by his party, the bell has tolled and a new man is stepping into his boots.

But what do we know of Minister Godongwana? How does he compare to his predecessor?

We draw a quick comparison between the two men: 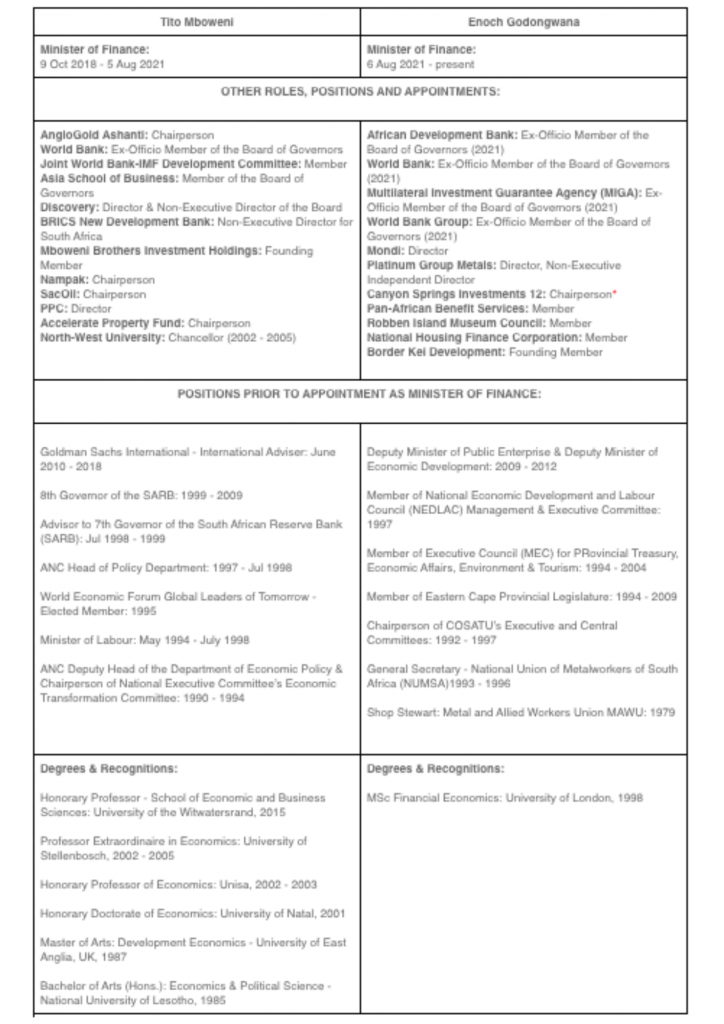 It is clear that the two men have ample experience for the role as Minister of Finance, but the men are as much in contrast as they have in common.

While both Mboweni and Godongwana have voiced their dismay for government overspending, their views are often at odds. Mboweni had clashed with trade unions persistently throughout the years. Godongwana, however, had served on COSATU’s council and has a long track record of working with such labour factions.

Mboweni had voiced his annoyance over political infatuation with initiatives like BBBEE before, and was also quite weary to jump into the territory of prescribed assets. Godongwana on the other hand has been highly vocal of the need for SA’s asset management industry to fund state infrastructure projects and investments.

What is most alarming for those who have followed Godongwana’s career is his involvement in Canyon Springs Investments 12, a company accused of ‘borrowing’ more than R100 million in pension money from South African Clothing and Textile Worker’s Union (SACTWU). The funds were never repaid, and Godongwana resigned as Deputy Minister of Economic Development in the wake of these allegations.

There were also rumours at the time that Godongwana had clashed with his ‘commander’, Minister Ebrahim Patel, at the time.

Court documents around the scandal revealed that Godongwana had been chairperson of the company when the first R19,8 million of the R100 million loan from the pensions were paid into their account. Further records showed that approximately R25-million of the loan money was used to launch Godongwana’s other business, Pan African Service Benefits. Much of the other millions were ‘loaned’ to other of Godongwan’s companies such as Iboma Call Centre, Iboma Properties, as well as channeled to former affiliates and partners such as Richard Kawie and Silumko Nondwangu (Godongwana’s brother in law and successor in his role at NUMSA).

The matter was formally resolved in 2017, with Godongwana agreeing to pay back the total amount claimed from him with interest, and the 417 Inquiry into the allegations found that there was no malicious intent from Godongwana.

This, of course, does not necessarily ease our minds. If Godongwana had not been deliberately involved in the corruption, then it begs the question how someone with his experience who shared 50% of the shares in Canyon Springs (with his wife), could have not been aware of R100 million in pension money floating around his companies.

We can’t know what Ramphosa was thinking, nor how our new Minister of Finance will affect SA’s economy – especially with the tough economic climate and debt purse he’s been handed.

For now, as usual, we’ll have to wait and see.

If you’re not in the mood to hang around indefinitely, talk to Rand Rescue about your cross-border financial needs. We’ve helped thousands of South Africans move their money to their new homes. Simply leave your details and we’ll get back to you!