03 May Most Popular Destinations For South African Emigrants

Rand Rescue takes a look at the favourite South African relocation destinations around the globe.

Planning on relocating? These destinations are South African favourites

This is no surprise – South Africans love making the land of Oz their new homes. But why the draw to this place down under?

There are several reasons why saffas love Australia so much. Firstly, the climate and environment – although decidedly different – makes us feel quite at home. Much like South Africa, Australia has a varied climate based on the oceans and currents surrounding it as well as its placement on the hemisphere. Australia has a temperate zone which includes Grasslands and Desert while the Tropical zones have equatorial, tropical and sub-tropical climates. Comparatively, South Africa also has different climatic regions which include arid, veld, subtropical, temperate and Mediterranean climatic regions.

One of the great calling cards of Australia is, however, not the climate, but the historical and geographical significance of the location. For South Africans challenged with a sordid and turmoiled past, there are few places as accommodating as the country which grew its amazing culture from the embers of exiles. Moreover, the country has faced similar cultural inequalities and is as far displaced from conventional western society as other first world countries. On a psychological level it feels so much like home because the mannerisms, cultural fusion and foreignness of the place makes saffas feel like we’ve found a home away from home.

Contrary to our love of Australia, the Canadian trek is one which is filled with wonder and novelty. 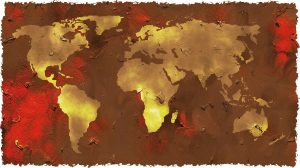 Of course, South Africans are drawn to the country for similar climatic regions, but there’s something more to it. Canada offers an escapism and newness which is so far removed from our current situation that it is simply refreshing. It is a place which has hardly seen such conflict and uproar as South Africa and therefore sates our need for stability, amicability and otherness.

Canada is known for being unbiased, accepting and accommodating. It is a place which offers South Africans the same sake wild outdoors that we are used to – and yet with a different air, a different language, culture and more safety than we could ever hope for.

Surprised by this entry? Well don’t be. Although most South African emigrant families prefer regions with similar cultures, faiths and laws, a great drawing card for the UAE is its financial benefits – especially for the unmarried, recently qualified or single professionals.

Of course, most expats don’t move to the UAE with the aims of staying permanently, but strangely many return after short stints there – having fallen in love with the rich diversity, dynamism, and energy of the place.

This is another no-brainer. South Africans feel right at home in the US. Much like expats in Australia, the move to the land of opportunity.

Of course, America is an enormous place compared to South Africa, and all regions may not appeal to most South Africans. The most popular expat locations seem to be those most akin to the climate, culture and lifestyles back home – especially the buzz of Johannesburg, the small-town life of the platteland and the rich summer vibes of our coasts. These include Texas, Georgia, Tennessee, North Carolina, New York, Montana, Kentucky, Washington and Florida.

Ah, how can we not mention the down under of down under – New Zealand. Most saffas liken New Zealand with Australia – especially if they haven’t visited the island country. But locals will tell you there are as many similarities as there are differences.

The accents, for one, are as familiar as they are weird and wonderful – much like South Africa. You’ll find yourself thinking someone may be Australian, Scottish, Afrikaans and American all at once. Add to this the lush vegetation, strange dark beaches and amazing homeliness of the people and it’s hard not to make this country your new home.

It’s a small place filled with wonder and folklore with farming communities reminiscent of home and sheep for days!

Not a favourite of families moving abroad, but ever more 20- and 30-somethings are trekking to this Asian country to “catch a break”. Whether to get a breath of fresh air, escape from the confines of the society they grew up in or simply to experience new cultures, cuisines and ways of life.

The Republic of Korea, as it is officially known, doesn’t offer the vast open spaces and financial securities of many other expat destinations. If you’re moving to this destination you will have to make do with small rooms, strange laws and you won’t find your favourite boerie at the local market.

Yet this destination is a top choice for those who wish to make a home away from home on their own.

No South African expat list would be credible without the mention of the United Kingdom. Of course, Brexit notwithstanding, saffas are still seeking out this region to call home.

But why? Well, it seems to be a little bit of genetics, custom and pride. South Africa has many ties to the UK which makes Great Britain seem like home. For one – the regional dialect of English (at least on paper) is much akin to the one used in South Africa and taught in our schools and universities. Furthermore, South African law has its foundations in common law from Britain (as well as civil law from the Netherlands and customary law from within our country borders). And although it is a contentious issue, South Africa’s independence from British occurred less than a century ago – politics aside, many of us still have family members, friends, and ties to the British colony up north which makes it easier to assimilate in this new country.

Where would your funds want to go?

Of course, you can’t really move anywhere without the financial backing to make that great leap.

Rand Rescue can assist in moving your funds across borders, whether you want to exchange your rands for pounds or want to move all your money abroad permanently.