South Africa Is Winning Big In 2019

Posted at 22:26h in Uncategorized by admin 0 Comments
0 Likes

It’s been a year of ups and downs for South Africa, and when it comes to service delivery, political upsets and economic matters, the silver lining can oft be hard to find. Luckily, one silver (or should we say gold) lining is keeping our chins perpetually up and our spirits soaring with pride and elation.

South Africa is winning big in 2019! And Rand Rescue is here to celebrate with the guys and girls in green and gold.

Perhaps it goes without saying that South Africa’s World Cup win may have been the biggest feat we’ve overcome this year, but we think not.

It seems SA likes to rack up our years in the dozens before we show the world what we’ve got, taking the cup every twelve years. Perhaps what made this particular Word Cup win so magical was that it once more brought South Africans of all creeds together, forgetting for a moment what it is that divides us as people. With Siya Kolisi heading up the team and Rassie Erasmus at the steer, the team fought with a vigour which  English team to its knees. 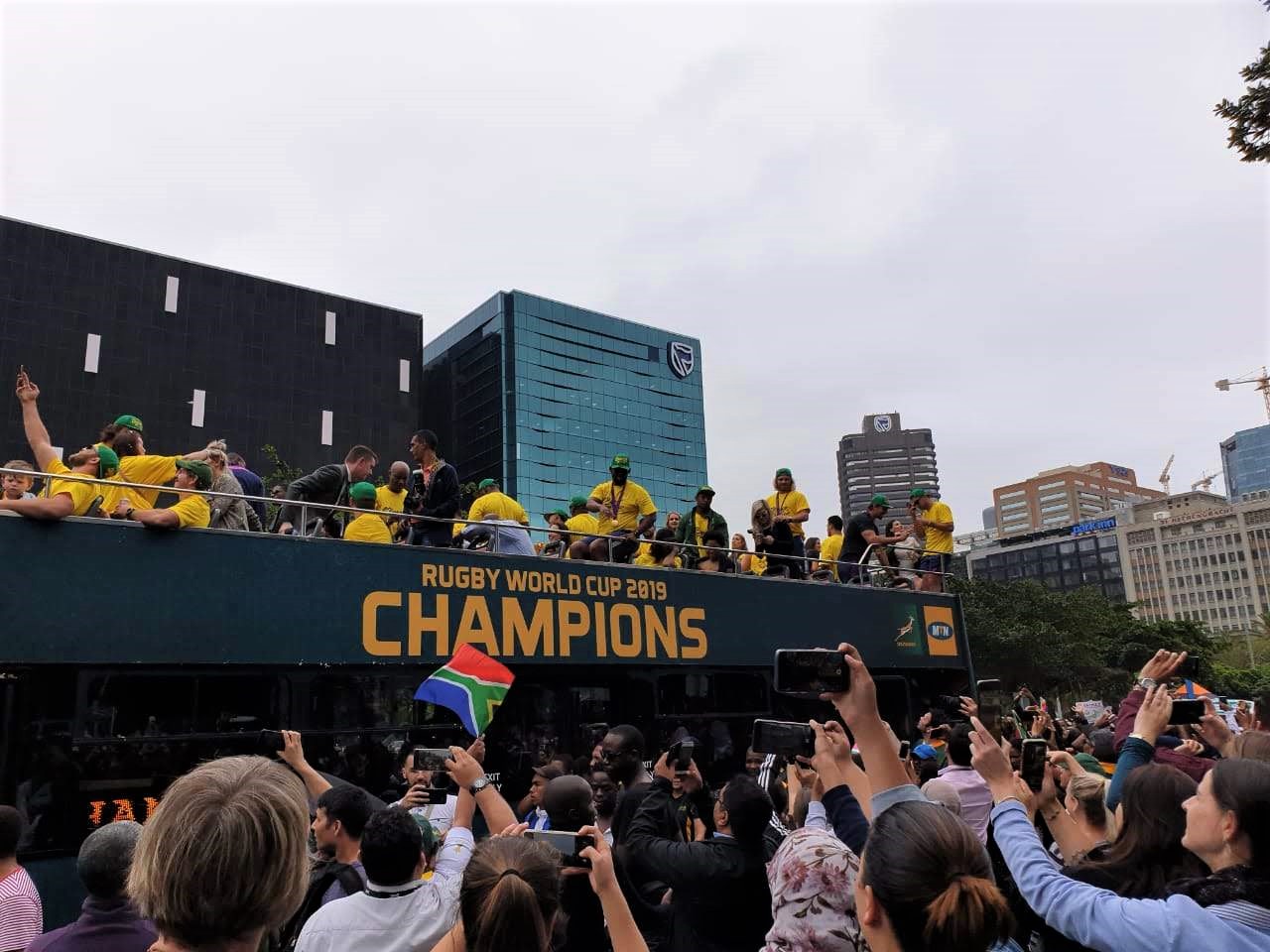 But it was Erasmus’s words after the fact which underscored the true secret weapon in the Springboks’ arsenal – they had a duty to inspire. They went on the field that day, having lost once before in the Cup, and not only did they not concede a try, but they did not concede their self-appointed duty to represent each person in the country they were playing for.

And as for Faf’s rainbow-nation underwear? Just another Saffa treat to show the world what unique beings South Africans truly are.

South Africa is truly representing at the World Para Athletics games in Dubai this year.

Among numerous talented athletes representing South Africa is Mpumelelo Mhlongo, who not only won a silver medal for the 100m sprint, but broke the previous world record! Classifications and races in the para games are a bit different to your standard games, in that participants run in different classes. What makes the feat so spectacular is that Mhlongo is classified as a T44 athlete (for which he was awarded the silver medal), but he broke the world record in a T64 race!

In IPC Athletics, each participant receives a classification (T for track and F for field with a number allocated to them) relevant to their specific competitive disadvantage and impairment. This classification allows differently abled athletes to compete according to their class of ability and they are subsequently awarded by their level of skill, fitness and ability. In general, a smaller number indicates a greater competitive disadvantage. Mhlongo as a T44 athlete breaking a T64 record, is therefore truly an amazing feat.

But Mhlongo is not the only athlete flying the flag for SA. Our country was represented by 26 athletes in total. Among our winners are SA paralympic Sportsman and Sportswoman of the year, Ntando Mahlangu and Arune Weyers who each took gold in their respective races.  Weyers took three medals and set a new record for the games, Mahlangu finished first, ahead of his paralympic hero, Richard Whitehead.

A news headline which flew below the radar as the big teams and athletes representing SA were flying the flag was the story of Kholo Montsi, a 16-year-old tennis player from Cape Town.

Montsi, who won 5 ITF titles in 5 weeks earlier this year went on to become not only SA and AFrica’s top-ranked junior boys tennis player, but is now ranked 18th in the ITF world tennis rankings. 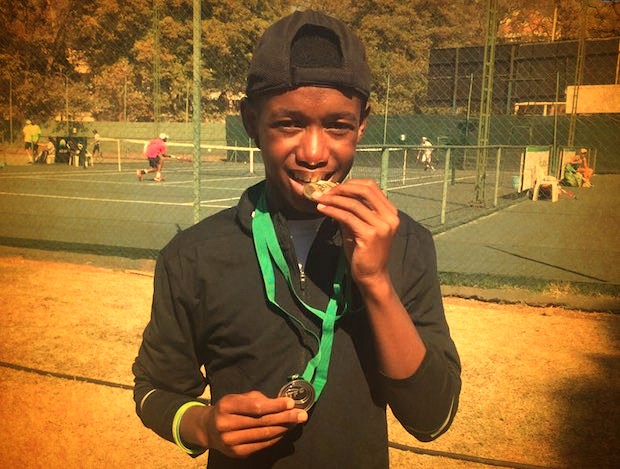 One of Montsi’s icons is the world famous tennis star Lloyd Harris, who trained at the same academy – Anthony Harris Tennis Academy in Cape Town.

Earlier this year, South Africa was also represented by our Protea Netball team at the 2019 Africa Netball Cup in Cape Town – taking another win for team SA. 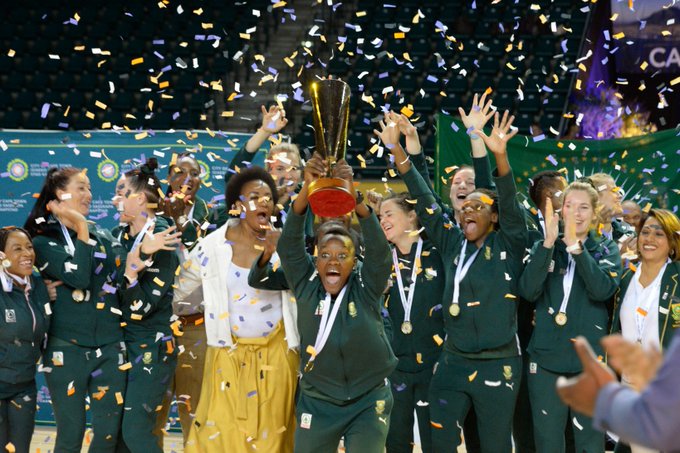 The team defeated Zambia in the final with a score of 72-53, winning their sixth consecutive game in the tournament. The cup is a warm-up for the Proteas’ netball tournament series against England which will run from 29 November to 1 December this year.

South Africans have proven that we’re not just masters of the track, pitch and field, but versatile in our athletic prowess.

King was subsequently crowned player of the tournament. King is hoping that her winning streak would call attention to the sport and garner more support and sponsorship for South African pool players.

And what is a South African brag without mentioning some cricket? This time it’s not the Proteas who have made us proud, but the varsity team Assupol TuksCricket who won the Rerd Bull Campus Cricket 2019 title at the world finals in the UAE.

South Africa played rivals Pakistan in the finals, claiming the overall title mere hours after the Springboks took the RWC title. Other teams who participated in the international cup were Bangladesh, India, Sri Lanka, the UAE and the UK. This is the third time Assupol TuksCricket has claimed the title. Team captain, jiveshen Pillay was also named batsman of the tournament, scoring 245 runs over 5 matches.

South Africa’s Brad Binder is another name to watch out for in future as this racing driver is going places, and getting there ahead of the pack.

The race signalled the end of Binder’s Moto2 career, as he is moving up to MotoGP next year.

But it’s le Clos who is undoubtedly stealing medals, hearts and headlines at the cup this year, placing South Africa 12th overall in the medal rankings. Le Clos won two medals for team SA which also makes him the most decorated male FINA World Cup swimmer in the history of the competition.

It’s not just the boys in green and gold who have made us proud this year as South Africa’s women’s rugby stars also gave us reason to celebrate.

Team SA took the cup in the 2019 Rugby Africa Women’s Sevens tournament, beating Kenya with a score of 15-14 in the final match. The tournament was held in Tunisia.

In another first for SA, South African surfer Davey van Zyl became the first international surfer to win the Vans Pro competition in Hawaii this year. Van Zyl took on the three metre waves in the final and claimed victory over all 111 other competitors at this year’s competition.

This is the first time in history that a South African, and non-local, won the competition.  Van Zyl’s SA teammate, Benji Brand (ending in 10th spot), also made his mark when he scored the first 10-point ride. Other saffas representing the country were Matt McGillivray and  Beyrick de Vries (joint 9th) and Dylan Lightfoot (17th).

Caitlin competed at the 2019 Artistic World Championships in Germany earlier this year and made history at the Szombathely Challenge Cup, winning a gold medal in the Uneven Bars. The 17-year-old is a true marvel and we can’t wait to cheer her on when she competes in the Olympics in Tokyo, Japan, next year.

In the words of Nelson Mandela, “Sport has the power to change the world. “It has the power to inspire. It has the power to unite people in a way that little else does. It speaks to youth in a language they understand. Sport can create hope where once there was only despair. It is more powerful than government in breaking down racial barriers.”

South Africans the world over have truly displayed their mirth this year and no matter where we find ourselves in the world, the camaraderie and spirit of the rainbow nation remains a part of us – may we fly the flag for SA even more so in 2020.