Posted at 07:26h in Uncategorized by Dean 0 Comments
0 Likes 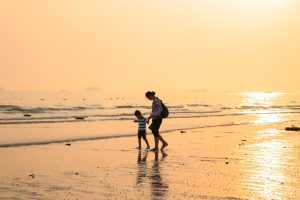 When we think of emigration, we usually picture a family unit settling down in a new country, or a young couple setting off on a worldwide adventure. It’s not often that we consider female headed households.

Rand Rescue takes a look at what’s holding these households back, and why they are the very groups who could benefit most from relocation.

The Gender Pay Gap guide which was published by the University of Stellenbosch in 2018 noted that only 20 – 50% of South African households were headed by married couples (20% Black, 35% Coloured, 50% White and Asian). Statista placed the average percentage of female-headed households in SA at 41,8% in 2019, with an estimated 7,2 million households, while the National Business Initiative (NBI) placed this number at 42,8% for the same year.

What about single father?

The antithesis does exist but in an SA context it is statistically insignificant and has not seen such drastic increase as in other countries, remaining at around 3% for several years.

There are other reasons why the whataboutisms don’t quite fly:

– Research shows that such households tend to have a limited financial and emotional impact on men who head these households compared to females in a similar position.

– In South African, the burden of the traditional female support is usually passed on to girl-children within the family who act as surrogates to absent or deceased mothers due to patriarchal concepts.

The problem is not a one-dimensional one, as the women who run these households are mostly single and unsupported. Female-headed households within non-traditional structures such as men assuming conventional subordinate female roles are so anomalous that they are insignificant for statistical purposes.

Income vs Expenditure: a double whammy

If we turn our attention to wage gaps, it’s hard to ignore the writing on the wall.

The report, “Inequality Trends in South Africa: A multidimensional diagnostic of inequality” compiled by the Auditor General in 2019 highlighted some additional points of concern. 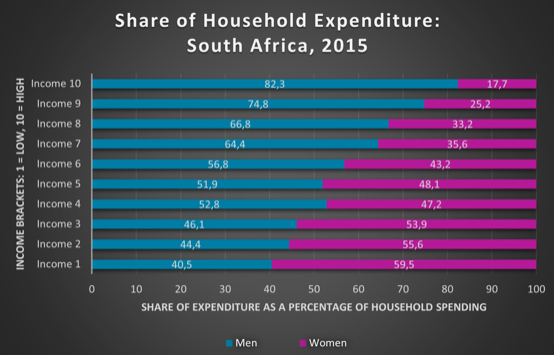 The share of expenditure indicates what proportion of the household income is used by which gender in different income groups. It should be noted that the report also indicated that most female-headed households are in income groups 1 – 3. Using research compiled by Anita Bosch (University of Stellenbosch Research Chair for Women at Work), we can assume that within income groups 1 – 3, 50 – 80% of households are headed by single mothers. This contextualises the share of expenditure as the purchasing power for these groups would invariably reside with the mother as head of household.

This indicates a significant disparity between genders, irrespective of the income bracket.

In an article published by Business Tech in 2021, Andre Tuck from 10x states that South Africans need an estimated R1 million saved for retirement per R5 000 income per month required post retirement.

If one’s average life expectancy is 61, R1 million is a bit steep for a one-year budget – provided you retire at 60. But this number isn’t far-fetched if you need to survive for another 8 to 19 years (using the median and higher averages for women. Should you retire at the age of 65, this still requires savings for 3 to 14 years based on averages, and life expectancy has been rising steadily over the past few decades.

It’s no surprise then that The National Treasury indicates that only around 6% of South Africans can retire comfortably. In its introduction to the ‘two pot system’ (which we’ll will discuss in detail in a coming article), Encouraging South African households to save more for retirement, the Treasury notes that 36% of South Africans do not have enough savings to survive more than a month without a source of income, and 56% were in financial distress at the time of publication. In fact, the pool of members across all retirement products in SA (pension, provident and RA’s) dropped from 6 884 845 in 2017 to 6 751 548 in 2018. This is more than 130 000 contributors to retirement funds who simply dropped off the grid in a single year – until this point there had been a significant annual increase in membership (2011 – 2017). This is not surprising, since the International Monetary Fund (IMF) notes a systematic drop in GDP per capita over the past few years (2013 = 400,80; 2020 = 335,34), with the highest GDP per capita since 1993 in 2011 at 458,71. 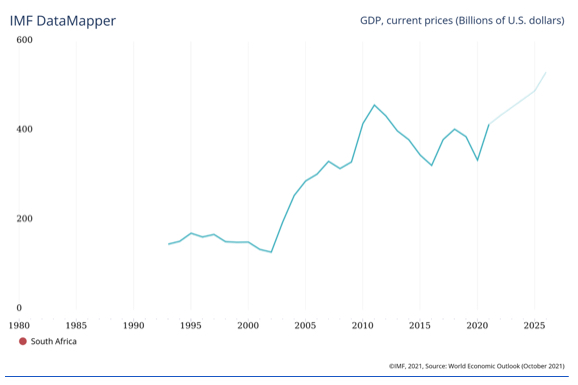 The conclusion is not only that all South Africans struggle to save for retirement, but that this burden is more significant for women given higher life expectancy and lower income.

So why are women better off in other countries?

Payment disparities: SA vs the world

Not only is a single woman heading a household more likely to receive social support when living in such countries, but she is also less likely to experience discrimination and more likely to close the wage gap.

The OECD indicates that income disparities have been systematically decreasing worldwide in the past decade, except for SA where it remains stagnant and is significantly higher than other nations.

Of the most favoured immigration destinations for South Africans (New Zealand, Australia, Germany, Canada, the United States of America, the United Kingdom, the Netherlands, France), the closest competitor with SA is the USA, with a wage gap of 17,1% (2020) compared to our income disparity of 28,8%.

Why the fear to leave?

The data mentioned in this article points towards several factors which prevent women from emigration:

– Women are more likely to work in the informal sector OR in lower-ranking positions which prevent access to offshore job opportunities.

Additionally, there is a stigma attached to women pursuing careers or taking steps to improvement – as indicated by the expenditure graph, there is a societal expectation for men to spend more on both lifestyle and self-improvement and as indicated by the prevalence of female-headed households there is also a higher onus on women’s responsibility towards their families as caregivers. The stigma has also led to perpetuated myths about familial rights and responsibilities – such as the idea that one will not be allowed to leave the country with your children if another party opposes it. Yet there have been a few cases in the past decade where South African authorities have ruled in favour of the emigrating parent and their children and allowed relocation abroad.

Joint research by numerous Universities under the title “The confidence gap predicts the gender pay gap” further illustrates that there’s a confidence gap which coincides and informs the gender pay gap. It’s a bit of a catch-22: women are more hesitant to apply for positions or push for advances in business due to the existing disparities in society. They aren’t entirely wrong, as research indicates that women in STEM jobs, for instance, are 50% more likely to suffer discrimination, isolation, unfair dismissal, exclusion, harassment and stagnation in their careers than men.

Need to take the leap?

There is the cost aspect to consider, of course. Emigration is not a cheap affair. But once the decision is made, a plan can be set in motion, one can connect with sponsors and/or offshore employers and save for the grand journey towards a better future.

If you’re looking to emigrate and need guidance with the financial aspects of your move, reach out to Rand Rescue and we can assist you.